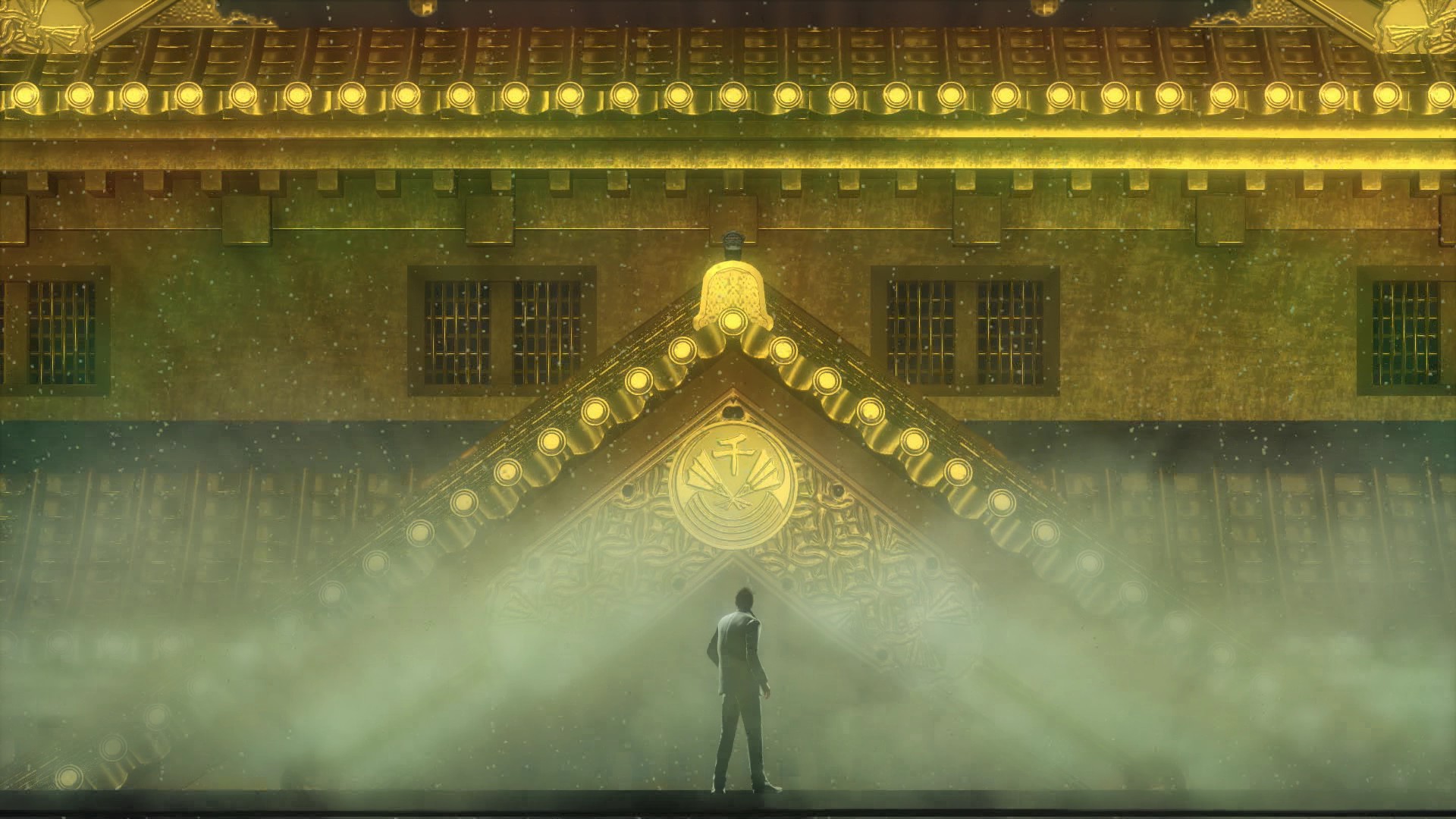 As I play more of these games, their similarities are becoming harder to distinguish, which isn’t good for a series ranking. Kamurocho, long and wild plots, Kiryu and Majima, surprisingly deep mini-games, one or two large mini-games like Cabaret Club, and so on are becoming more and more inseparable between releases. Still, the series ranking must go on, so here I am with a rank of Yakuza Kiwami 2. The rank itself is at the bottom of this blog. With that said, let’s get into it.

Yakuza Kiwami 2 takes place one year after the first game and follows Kiryu getting back into the life he left after Tojo Clan’s Fifth Chairman is assassinated. To prevent war between the Tojo Clan and Omi Alliance, Kiryu tries to work things out between the two, but he soon finds out that a rogue portion of the Omi Alliance ran by Ryuji Goda is making things complicated.

In terms of the plot of the game, this one certainly has its ups and downs. Overall, I actually quite like the plot of this game compared to the others, but there are definite flaws to it. I surprisingly enjoyed the new antagonist, Ryuji Goda, as this brute force punk-ish type character who still has standards, which feels fitting for a game like this. The plot still has its usual twists and turns, a lot of which I didn’t see coming, but there is some crap to it I didn’t like. A lot of my issues with the plot can be seen in the ending of the game (don’t worry, no spoilers), where all of the different groups and factions you’ve been dealing with all converge in on each other. What it ends up being is (what feels like) an hour of constant surprises and betrayals followed by long-winded speeches after being shot, making for this complicated and goofy mess of an ending that feels like a cheesy soap opera more than anything. Maybe this whole series is just one cheesy soap opera and I am just starting to realize that with this game, but this game can feel pretty cheesy in the wrong ways.

The gameplay is still its same old self: third-person action brawler in Kamurocho with thugs to hospitalize and mini-games to win. Despite its familiarity, this game does have some larger changes, with the big one being the engine. While this isn’t the first Yakuza game to use this new engine (the first game being Yakuza 6), this is my first time with it, and I like what I see. The ragdoll physics feel goofy in the right ways, the game and especially the environments look incredible, the invisible walls are more hidden, load screens for entering buildings are almost entirely gone, the environments have more walkways and verticality, and more can be seen with this new engine. My favorite addition to go alongside this new engine is the ability to walk around in first-person. Seeing this game from this perspective was a new level of immersion for me, and I spent a lot of my exploration time in first-person because of it. The new engine isn’t anything game-changer, but it does improve the game in meaningful ways I enjoyed. 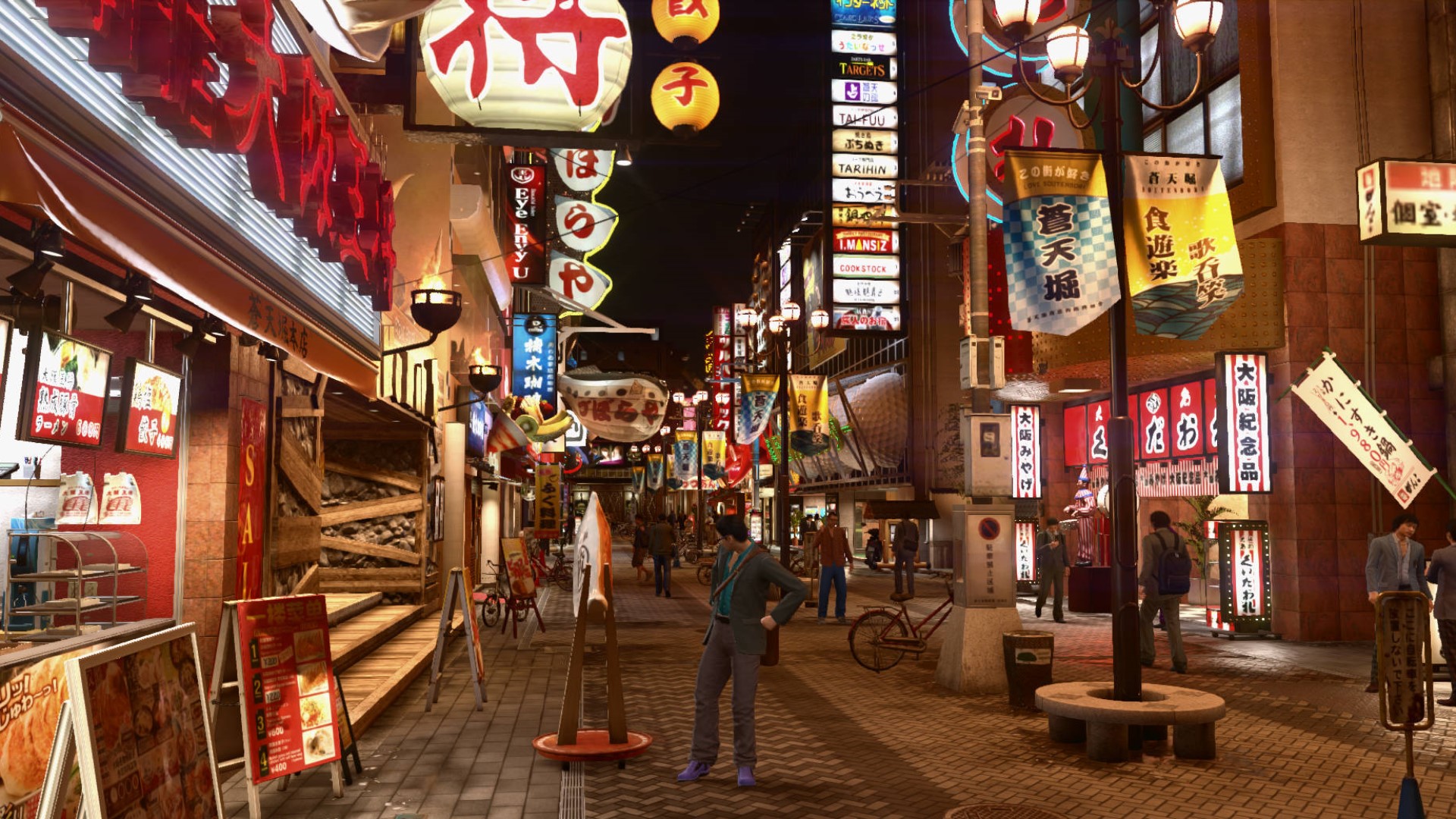 Exploration and Kamurocho is a big piece of Yakuza, and I found that experience mostly positive, but with a few faults. For starters, Sotenbori is back, which is a fun addition to have. The new engine allows for more exploration, and the cities themselves look like they have a new coat of paint on them that looks stunning. Some stuff like enemy trackers and key trackers are built in from the start instead of being an item, and there are less roaming enemies to deal with. You can now place markers on the map, and taxis have a lot more stops on the map. On top of all this, I am starting to really have familiarity with Kamurocho, which I think is cool. The exploration isn’t perfect though. Majima Everywhere, an activity I surprisingly enjoyed, is gone. Pocket Circuit, my favorite mini-game, is gone. The karaoke mini-game feels like it lost a lot of the pzazz I fell in love with. A few of the new mini-games like golf are fun, but there is one new addition that I felt extremely uncomfortable with. There has been a few pervy mini-games in the past two games, but this new one involving taking pictures of half-naked women and trying to string together conversations takes the cake for being the most uncomfortable (did I mention this is an FMV mini-game?). Kamurocho and Sotenbori are still fun to explore, but I wish there were some improvements to the mini-games.

Accompanying the mini-games are what I like to call the big mini-games. Kiwami 2 has two of them: Cabaret Club and Clan Creator. Cabaret Club was first introduced to me in Yakuza 0, and while I’m not the biggest fan, I am starting to come around on it. It’s mostly the same here, so I won’t really talk about it. Clan Creator, on the other hand, is in my opinion the worst big mini-game yet. Clan Creator is a tower defense mode where you set up your own troops at certain chokepoints to stop waves of enemies from destroying construction equipment. The mode is half-baked and unwieldy, and I had zero fun playing it. Overall, the big mini-games were underwhelming for me, even with me coming around on Cabaret Club.

The more I interact with combat in this game, the more I understand why Yakuza 7 switched to a turn-based style combat. The combat in these games isn’t bad, but I don’t think it will ever be perfect, and this game is no exception. Unlike the previous two games, this game only has one fighting style, which I found to be overall pretty good, but I did like having the variety of fighting styles more. The fighting in this game feels more weighty, which I liked, and there are a bunch of new abilities that are pretty fun to use. I’m not much of a combo guy, so I can’t name you a single combo move in any of the games, but there are some new abilities even to the base combat like charged attacks, charge up attacks at the end of boss fights, the ability to pick up and store weapons, heat actions involving characters you meet in sub-stories, and more. It isn’t perfect, with bosses feeling too easy and the large guys who block doorways being a particular annoyance, but it overall feels less frustrating than the previous games. 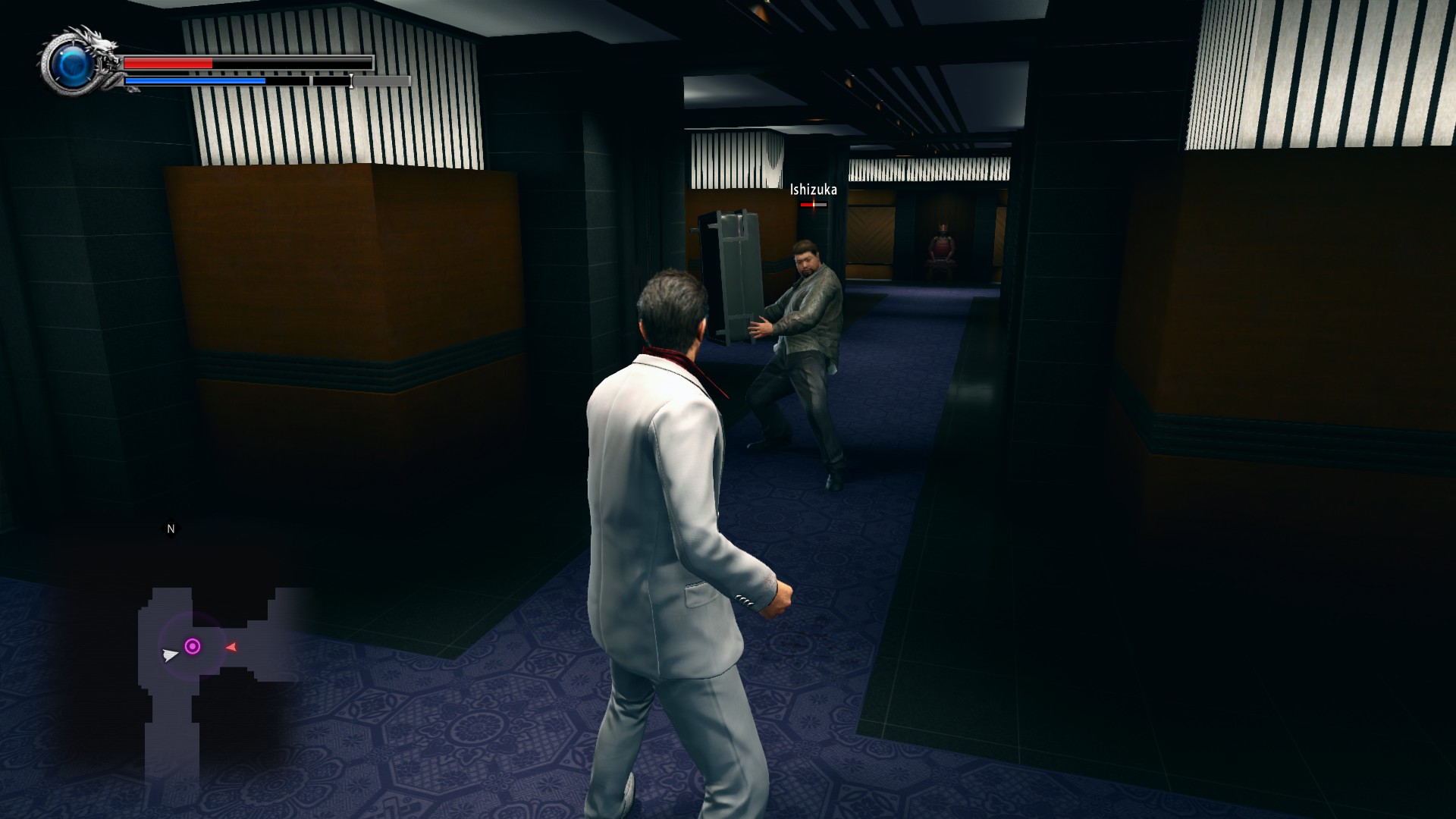 While these enemies aren’t new, they are the most annoying in this game.

After completing the game, the usual Premium Adventure shows up, offering a doorway back into the game for completion as well as a few costumes and the ability to change the time of day. Another option in this game, though, is the ability to play through a short side campaign with Majima. Overall, it’s nothing special, but there are a few neat tricks up its snakeskin sleeve. Majima’s fighting style is reminiscent of the break dance style from Yakuza 0, which I love, and he carries a blade that doesn’t break. Also, he can send money to Kiryu, which can be used in the main game. It isn’t anything spectacular, but Majima’s side content is an extra hour or two of Yakuza if you want it.

In conclusion, Kiwami 2 is a crazier and bolder sequel to the first Kiwami game, but not all of it is great. This one is a tough game to rank, but I have decided to put it below Kiwami. While its new engine is welcoming and its combat is less frustrating, I don’t think the story hits as well as the first game, and I think some of the mini-games like the tower defense game are a big let-down.

Login to vote this up!